California Gold and Silver Exchange is excited to announce the coming of a series of new products from St. Helena: The Queen’s Virtues – One Ounce Silver Bullion Coins.

The Queen’s Virtues are the principles founded by Queen Victoria and carried forward by Queen Elizabeth II. The core virtues Victory, Truth, Justice, Charity, Courage, and Constancy. Moreover, the Queen’s Six virtues were first presented on the Victoria Memorial, situated outside of Buckingham Palace.  Hence, these beautiful new coins will be issued yearly starting with the St. Helena Victory Silver Coin.

Now for the first time, The Queen’s Virtues are celebrated in a historic six coin series. The first coin in this magnificent series represents Victory, one of the most prominent virtues a Monarch can hold, the triumph over an enemy. Victory is a key element in both Queen Victory and Queen Elizabeth II’s reign. Furthermore, victory signals the end of the conflict and a celebration of peace. The Queen as Sovereign is Head of the Armed Forces and is still the only person able to formally declare war and more crucially, an end to conflict.

The Queen’s Virtues Victory one ounce silver bullion coin is official legal tender of Saint Helena. Saint Helena is a British Overseas Territory located in the South Atlantic Ocean. The reverse of the coin features Victory modeled after the Winged Angel at the top of the Victoria Memorial. Further, the Rim has the words Victory Through Harmony and the The East India Company mint mark. The obverse bears the effigy of Her Majesty Queen Elizabeth II by internationally renowned sculptor Raphael Maklouf, the issuing country St. Helena, the denomination £1, the weight, fineness, and the year date. In addition, both the obverse and reverse features an East India Company pattern in the fields. 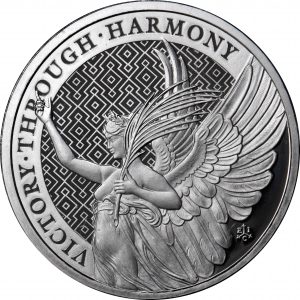 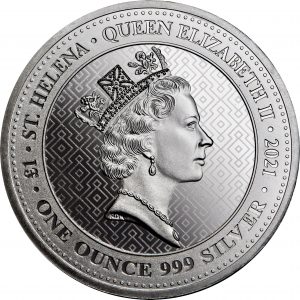 Buying from California Gold and Silver Exchange is as easy as bringing in the cash and taking home the product same day.  The coins are brilliant uncirculated coins and you can purchase in any quantity. The Saint Helena Victory silver coin will be available the Week of February 2.  More importantly, you can call us 909-985-4653 for more information.  You can also pay by personal check or wire.  We do require a 10% cash deposit and the balance can be in check or wire.  We would then release the product approximately 5 business days after the clears the bank, or 1 business day after receiving the wire. For more information on what we sell visit our “What we sell” page.

90% Constitutional Silver Now Available at as low as Spot plus $3.49 per ou...
Scroll to top