California Gold and Silver Exchange is excited to be carrying the 2022 The Royal Tudor Beast Lion of England 1 oz Gold Coin.  This coin is now available for purchase. Get this commemorative coin, the first in the series, while supplies last. Furthermore, Click Here for more information on gold coins we carry.

Inspired by the majestic Royal Beasts that stand guard over the moat of Hampton Court Palace, the Royal Tudor Beasts bullion coin collection begins with the mighty Lion of England. Strong, intimidating and regal, the lion was a fierce figure to greet visitors to Hampton Court Palace and embodied the values of Henry VIII and his kingdom.

The original, gargoyle-like statue of the lion on the Moat Bridge at Hampton Court Palace inspired David Lawrence, who has captured the magnificent Lion of England in all its glory, with a flowing mane and sharp claws, against a surface animation background texture. The fifth definitive coinage portrait of Her Majesty The Queen by Jody Clark appears on the obverse of the coin.

This coin has been struck in one ounce of 999.9 fine gold and is also available as a quarter-ounce gold edition along with silver and platinum editions. 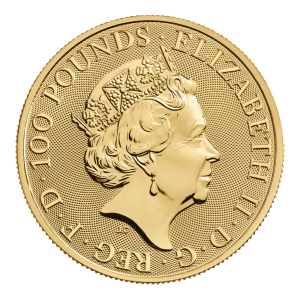 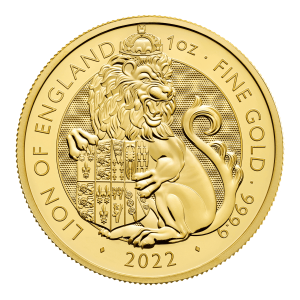 California Gold and Silver Exchange has secured this new product for purchase in store.  We now have a limited quantity of Lion of England bullion coins available in store for purchase.  Call for current pricing and availability.  For more information on coins from Great Britain visit The Royal Mint’s website. Furthermore, for other items available at California Gold and Silver Exchange visit our What We Sell page or call us directly at 909-985-4653 during regular business hours.